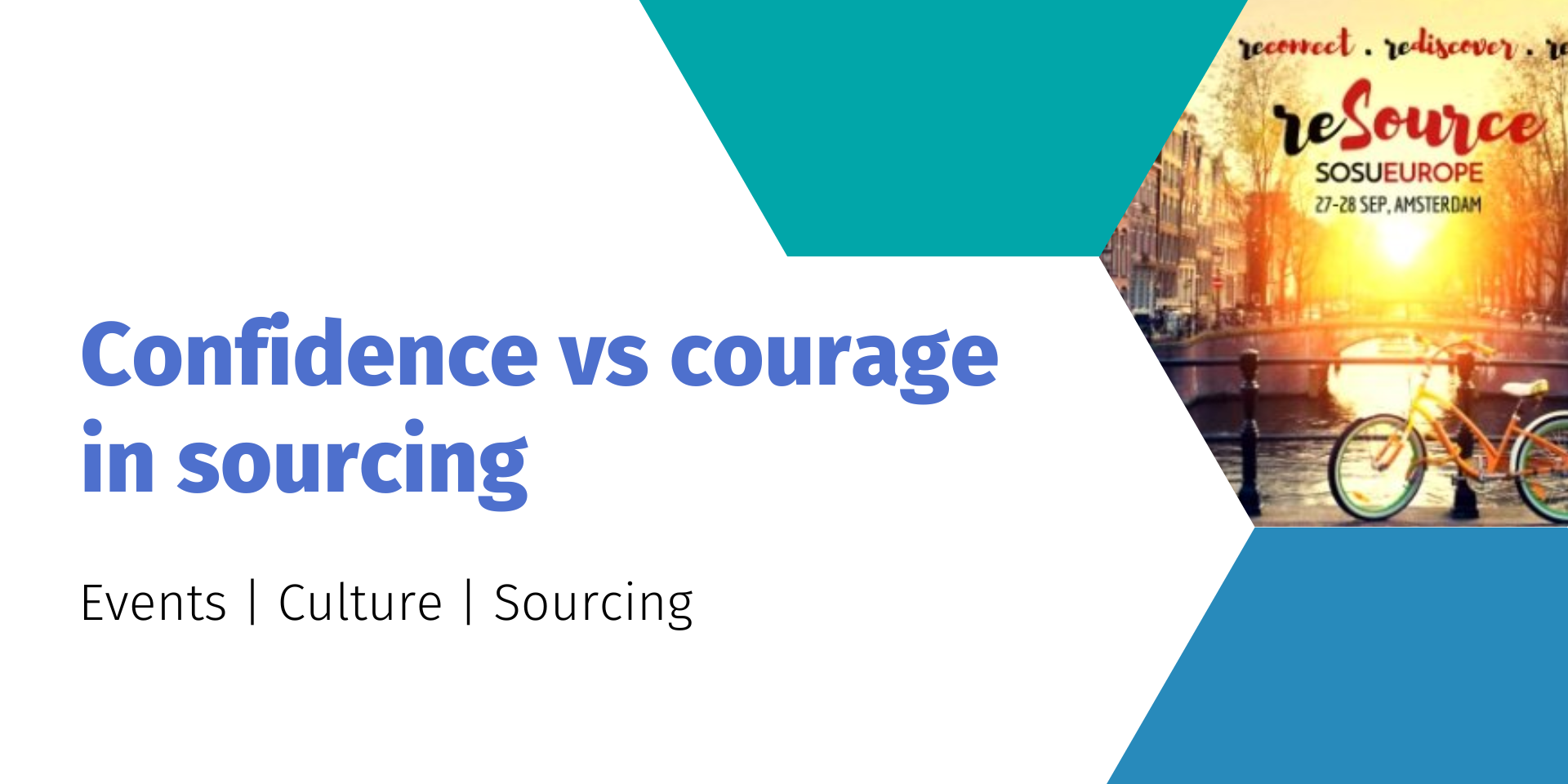 I had the great pleasure of coming back to the Sourcing Summit (#SOSUEU) stage again this year and this time the entire Super Source Me team was there too. It was our first conference together and also, the first time I’ve ever presented without slides.

I thought since I can’t share the slides with everyone afterwards, I’ll share my notes instead so you can check back if you’d like to revisit the topic. Here we go 🙂

Confidence is nothing more than an expectation of success based on past success. And if that is the case, it becomes pretty obvious why it’s so easy to gain confidence. All you need is to succeed one, two or more times and you’re starting to feel confident.

This is exactly what a sourcing workshop relies on: we go through the sourcing process together, repeating each step until the participants feel confident enough to start sourcing on their own. This is a relatively quick process. We can go through it in a day or two.

But confidence is equally easy to lose. When you don’t practice, when you come across even a small change in circumstances and, worse of all, when you don’t get the expected results, you’ll find yourself feeling quite insecure.

But confidence isn’t what makes a great sourcer…

Confidence fails in sourcing for 3 reasons:

We all know how quickly social media change. We’ve experienced it too, with a sourcing hack disappearing from one day to the next. This means you’ll keep going through cycles of gaining and losing confidence, there’s no way around it. And anytime you stop sourcing for a while, whether you’re on a sabbatical or simply go on a holiday, you can expect some insecurities to show up as you go back to run a search.

Most companies strive for economic growth. Their main goal, before anything else, is to keep making more and more money. This is of course unsustainable, because the resources on our planet are limited. So is the number of potential candidates in the market. But that’s a topic for another blog post 🙂
What is important to us here is that with growth, the sourcing challenges don’t just become bigger – they change altogether. Imagine you’re supposed to hire 10 developers in a niche technology in a difficult location. That sounds challenging, doesn’t it? But having to do it regularly over years, having to hire more and more every year… that may very well be impossible. You need to think outside the box to achieve this and by definition, that means you won’t be confident overcoming this challenge.

I can’t tell you what the next unpredictable factor will be that will unexpectedly take all of your confidence away. But afteer COVID, we all know what it looks like and what it feels like when it happens. We went from hanging out at conferences, figuring out sourcing hacks, to isolating at home worried about whether we’ll still have a job the next day.

When confidence fails, courage has to be the answer

I found a number of definitions of courage, but some of them resonated with me more than others. According to Wikipedia, for example, courage is the choice and willingness to confront agony, pain, danger, uncertainty, or intimidation. Oxford Languages defines it as the ability to do something that frightens you. While there’s some definitions that mention the absence of fear, I didn’t think they were useful at all.

I’ve also been a little obsessed with Brené Brown, her books and podcasts, over the past year. In her work, she points to courage being almost synonymous to vulnerability. And she defines vulnerability – this one is based on research – as uncertainty, risk and emotional exposure.

Just think about it! Uncertainty, risk, emotional exposure – none of these feel good. Unlike confidence, which can make you feel great. It’s unsurprising we tend to choose confidence over courage then, right?

But courage is simply necessary, because it allows you to develop deeper, more meaningful relationships with candidates. Sourcing has to be relational and unless you’re willing to be vulnerable, your candidates won’t open up to you either. You may build following with confidence, but you can only build engagement with courage.

Courage makes you a better sourcer

When you’re leaping into the new, you have no basis for confidence. That’s why courage is what you’ll need…

You can’t know whether you’ll succeed or not. Maybe what you’ve seen up on the SOSUEU stage, or a technique you’re learning somewhere else, won’t bring you any candidates at all. Maybe it will, but it will take more time than you expect.

…when you’re getting involved beyond the usual process

If you’re goal is to source more people than the number of people in the market, the only way to succeed is not to source at all. You have to explore alternatives such as moving people around the company, trying to run a project with people with a different background than what you initially imagined or maybe scrapping the project altogether.

You know the feeling of uncertainty when you’re sending out a message, worrying how it will be received? We’ve all been there. There are many rewards that come to those who take a risk and are willing to do something new, something different. But standing out requires courage.

In all of these situations, as painful as it is to admit, you can’t really control the outcome.

How can you build courage?

I can’t tell you I have a bullet proof method – I wish I could. But taking a risk is worth it and you start by working on these three areas:

Some simple ways for sourcers to practice vulnerability is to speak up and share ideas – even when you can’t prove ROI to your managers. We focus so much on proving we can make as much money as possible (or spend as little as possible) but we forget it’s equally, if not more important to do things just because they’re right. So next time you’re keeping quiet about an idea… be brave and speak up!

Of course, true vulnerability is only possible if it’s embraced by the leadership team too. If you’re managing a sourcing team, start by showing them your ow vulnerability. It’s ok to admit when you don’t know something or when you’ve made a mistake. And it’s ok to have uncomfrotable conversations, in fact, they’re what’s going to make your team stronger.

Work on self-awareness and sense of worth

They will be crucial for you to understand when you’re called to be brave. You’ll recognise fear and know not to react instinctively, but rather to give your actions some extra thought.

Reward courage and see it spread

When you see someone on your team being brave, thank them! It’s not always easy since courage can come in the form of some difficult feedback or someone questioning your decision. But there is nothing better or you team than the abilty to engage in some healthy conflict.

Dare to Lead (the book and the podcast)

The Call to Courage (Netflix show)

I am a social recruiting and talent sourcing trainer. I got my first job in sourcing by chance but it quickly became my passion. Over the years I have shared my knowledge by blogging about sourcing and employer branding. I have also had the opportunity to speak at industry events in Poland and abroad, including Berlin, London and Amsterdam. I have spent the last few years training, working with recruiters from in-house and agency teams. I am fascinated by organisational culture and linguistics. Privately, I like to spend time in the garden with my two adopted dogs.

Cześć! Tu Karolina i Kasia!
Hi! This is Karolina and Kasia!

Check out our latest products:
Go to Top